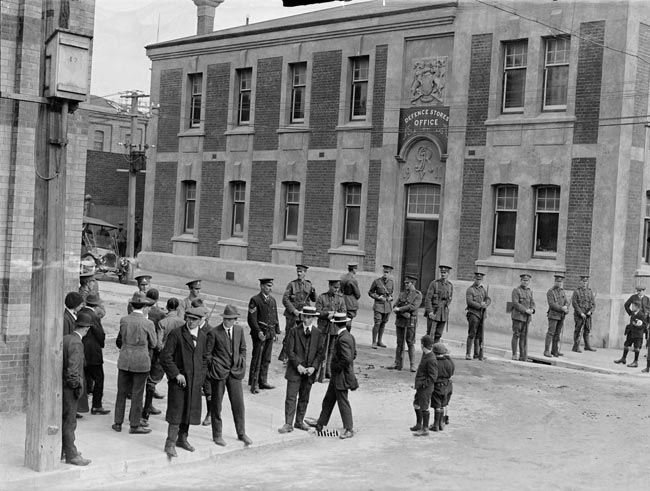 Members of the army stand near the Defence Stores Office, as the General Headquarters building was then known, during the 1913 waterfront strike.

On the busy intersection of Buckle and Taranaki streets is the landmark General Headquarters building, completed in 1911. This building and the Mount Cook Police Station (1894), to its east along Buckle Street, both anchor the military history of the area in the modern urban landscape.

Survivor of a military history

The former General Headquarters building is the sole remaining military building on a site that has more than 170 years of military history. It is one of only three surviving Defence Department buildings of that era – the other two are in Dunedin.

At the time of its construction it was part of military complex that extended along both sides of Buckle Street, from Tasman Street to Taranaki Street, and included the hilltop of Mount Cook (Pukeahu).

British troops were stationed first stationed on Mount Cook from 1843 following the Wairau incident, a conflict between New Zealand Company surveyors and Ngāti Toa chiefs in which 22 Europeans and at least four Māori died. In the years following, barracks, stores, drill halls and other military buildings were constructed on and around the hill, including Alexandra Barracks on top of the hill, which was used by the general officer commanding (the commanding officer) as a headquarters from 1903.

The General Headquarters was built on the site of old artillery barracks as a Defence Department store, where clothing and equipment for the Territorial Force were warehoused, and from which they were distributed. It retained this function at the outbreak of the First World War, though it was quickly overwhelmed by the massive demand for equipment in 1914–15. It was extended shortly afterwards into its current form, adding the frontage onto Taranaki Street.

The Alexandra Barracks were demolished in the 1930s to make way for the construction of the Dominion Museum and National Art Gallery building and the National War Memorial, so the store was taken over by the Defence Headquarters. The building was renovated using materials from the Alexandra Barracks to create partitions.

The area around the General Headquarters was the scene of rioting during the 1913 ‘Great Strike’, when waterside workers, miners and others went on strike. Clashes occurred on Buckle, Webb, Taranaki and Cuba streets when strikers and their supporters confronted the special constables (popularly known as Massey’s Cossacks) who were camped at the barracks on Mount Cook. Shots were fired on both sides during the so-called Battle of Buckle Street – this was the last time shots were fired in anger in the area.

The General Headquarters building remained in the army's ownership until 1962, when it was transferred to the Ministry of Works. They leased it to various organisations, including the Health Department Education Branch and, later, to the nearby National Museum for storage and as a conservation laboratory. The building was returned to the New Zealand Defence Force in 2002. There is no public access to the General Headquarters building.

One of the Berry Boys photographs featured on the exterior.

Currently images from Te Papa's Berry Boys photograph collection are displayed on the exterior of the building.

In March 2016, containers were placed alongside the building to help keep the public safe in the event of a significant earthquake.