Home Pukeahu Park Law and Order and the Military 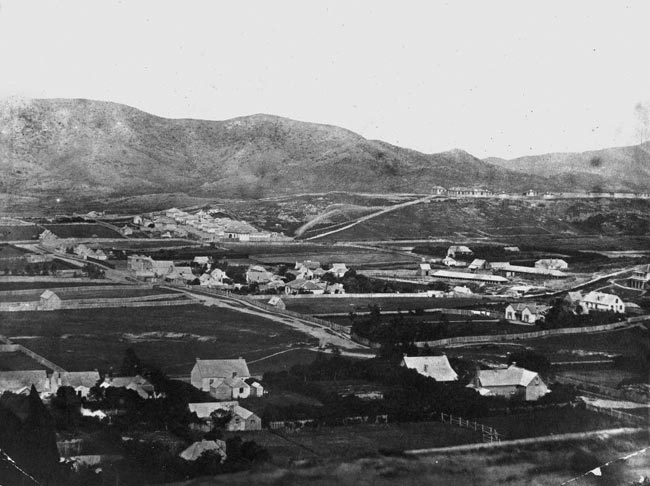 View of Te Aro in 1858. It shows the upper Mount Cook Barracks on the hill in the background on the right, and the lower Mount Cook Barracks and Buckle Street at the foot of the hill.
Credit: Alexander Turnbull Library. Reference: PA1-f-019-17-3. Photograph by Arthur Henry Stock. Permission of the Alexander Turnbull Library, National Library of New Zealand, Te Puna Mātauranga o Aotearoa, must be obtained before any re-use of this image.

A continuous military presence has remained at Mount Cook for over 170 years, and military and policing functions have often gone hand in hand.

As early as 1841 plans for military barracks on the summit and a gaol on the southern boundary were approved by Governor William Hobson. However, it wasn’t until July 1843, following the Wairau incident near Nelson – where conflict between New Zealand Company settlers and Ngāti Toa chiefs led to the deaths of 22 Europeans and at least four Māori – that 55 men of the 96th Regiment were first stationed at Mount Cook. They camped in tents at the base of the hill, which was surrounded with light palisades in case of Māori attack.

Before the arrival of the 96th Regiment, construction had already begun on a two-storeyed brick gaol on the hilltop ‘made as strong as bricks and mortar can make it.’ Prisoners from the Pipitea Street penitentiary levelled the ground and prepared the foundations. However, the site of the gaol was considered by some to be the proper site for barracks instead, and even before its completion there were calls for the ‘eye sore’ to be removed.

The military base expands

In 1846, when there was fighting between Māori and the Crown in the Hutt Valley and Pāuatahanui, more troops were stationed at Mount Cook. This led to a pressure on space. Two wooden barracks and a powder magazine were erected in 1847, during which time a permanent garrison of the 65th Regiment and Royal Engineers and Artillery was expected.

It was decided to seriously expand the military base, using the whole of the hill. The hill was lowered some 14 metres, and two acres of land earlier reserved for Māori was taken over. Additional barracks and other buildings were also erected at the foot of Mount Cook on the harbour side of Buckle Street. This led to the distinction of ‘Upper’ and ‘Lower’ Mount Cook.

However, the 1848 earthquake interrupted the expansion, and forced the closure of the prison. Wooden buildings, which had been seen to survive earthquakes better, replaced the damaged brick ones. Ordnance stores located in the Manners Street area were also severely damaged so, in 1850, 13 acres of Mount Cook were granted to the Board of Ordnance, starting their long association with the area.

By this time, Mount Cook was Wellington’s main fortification. However, an 1852 report by the Royal Engineers stated that ‘It … affords no protection to the Town which is entirely without defences.’

In 1859 the 65th Regiment was relieved by the 14th Regiment of Foot, who in turn were replaced by the Militia and Volunteers Office in 1865. Two years later saw the formation of a permanent New Zealand fighting force, the Armed Constabulary (a forerunner of both the New Zealand Army and the New Zealand Police), which was housed at Lower Mount Cook. Before the reclamation of Hauwai swamp and its redevelopment as the Basin Reserve in the late 1860s, public cricket matches were sometimes played at Lower Mount Cook. During the 1870s and 1880s further buildings were added to the site, including drill halls, a gymnasium and an artillery depot.

At this time, the barracks at Upper Mount Cook were being used as temporary quarters for immigrants who arrived under a government scheme. It was reported that ‘better or more comfortable quarters in any way are seldom, if ever, provided for the accommodation of immigrants.’ By the late 1870s they were also used as a temporary prison, most notably for the men from Parihaka who were arrested after passively resisting government claims on their land.

As the New Zealand Constabulary Force (formerly the Armed Constabulary) expanded in the 1880s, more buildings were added, along with a number of coast defence guns for training purposes. In 1892 there was a typhoid outbreak due to the dilapidated state of the wooden buildings, which meant the campus was vacated for 15 months.

Te Aro was the fastest growing district in Wellington in the 1880s, with a crime rate to match. Newtown acquired a police station and a sole constable in 1878, but there was a need for increased policing in the area. The Mount Cook Police Station was one of three opened in Wellington in 1894. As with many other buildings in the area, the police station was made with prison bricks. 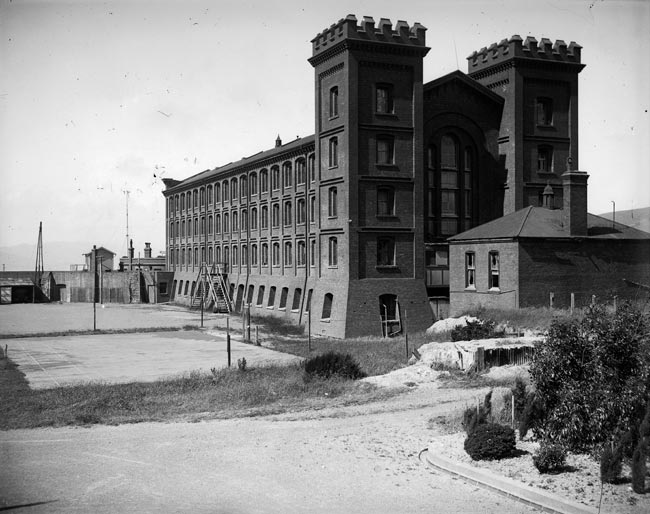 In 1883 plans were made for a new prison to be built on the summit of Mount Cook, replacing the immigration hostel. The hilltop was once again lowered, this time by around 10 metres. The design of the new prison was based on Pentonville Prison in London, and was built with bricks made on site by prisoners from the Terrace Gaol.

By 1900, when construction stopped, only one wing and the basements of two others were completed. Local opposition to the design and location of the new prison on such a prominent site meant that it was never used for that purpose. Other uses for the building were considered, including a museum, an asylum and the possible location of Victoria University College (which later became Victoria University of Wellington).

The military takes over

In the end the military took over the prison, using it for stores and barracks. As the basement wings were built underground, further excavation was done to make them at ground level. In 1903 the gaol was formally renamed Alexandra Military Depot, popularly known as Alexandra Barracks. The front offices of the barracks housed the General Headquarters and later the Council of Defence.

By 1907 some of the older buildings in Lower Mount Cook were in need of replacement. Work started on a number of new brick buildings, including the Defence Stores Office (later called the General Headquarters Building), which still stands on the corner of Buckle and Taranaki streets.

The Mount Cook complex served as a base for special constables, popularly known as ‘Massey’s Cossacks’, during the 1913 waterfront strike. Clashes between strikers and the special constables occurred around the Defence Stores Office.

With the outbreak of the First World War, the store facilities were inadequate to cope with supplying the New Zealand Expeditionary Force, which had a strength of 24,000 by the end of the war. In late 1914 temporary stores were opened at Trentham (Upper Hutt) where the army had built a training camp. The stores moved permanently to Trentham in 1930, allowing the General Headquarters to move into the stores building.

In 1931 the Alexandra Barracks were demolished to make way for the National Art Gallery and Dominion Museum building, and the National War Memorial Carillon. The carillon was dedicated on Anzac Day, 25 April 1932, with the Hall of Memories below it completed in 1964.

The National Art Gallery and Dominion Museum opened 1936, in an imposing neo-classical building. It closed in 1996, reopening on the Wellington waterfront as the Museum of New Zealand Te Papa Tongarewa.

The Second World War and after

After the start of the Second World War, expanding needs put further pressure on Lower Mount Cook. Existing buildings were enlarged and in June 1942 the War Cabinet took over the recently opened Dominion Museum, with the Royal New Zealand Air Force exclusively occupying the building from late 1943 until mid-1946. Underground bunkers for operational purposes were built behind the museum, and numerous air raid shelters, both tunnels and surface trenches, were dug into the hill.

A new building was constructed behind the General Headquarters building in 1941–42. During the Second World War the building was the headquarters of the army’s Defence Transport Services. In the late 1970s the building was known as the Home Command Building and was used by the Defence Services Transport Pool until 1986. It is currently used by the Wellington division of the Royal Naval Volunteer Reserve, who relocated there in 1978. It is named HMNZS Olphert, in honour of Captain Wybrants Olphert, ex-commander of the Wellington division.