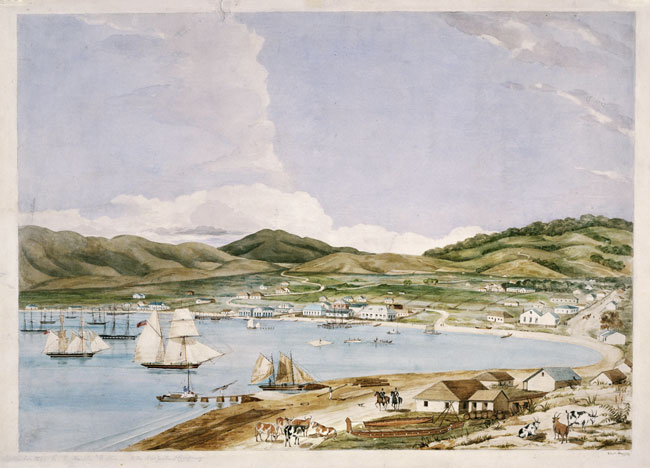 Charles Heaphy drew this picture of Wellington in 1841 for the New Zealand Company. Pukeahu/Mount Cook is seen in the middle of the picture, with a dirt road winding up towards it.
Credit: Alexander Turnbull Library. Reference: C-025-009. Watercolour by Charles Heaphy. Permission of the Alexander Turnbull Library, National Library of New Zealand, Te Puna Mātauranga o Aotearoa, must be obtained before any re-use of this image.

From the early 1800s European whalers and sealers worked the waters around New Zealand and established numerous stations around Cook Strait, and on Mana and Kapiti islands. The first recorded visit by a European vessel into Te Whanganui-a-Tara was in 1823, when, around the middle of that year, Captain John Day visited in the sealing brig the Wellington, a ‘curious coincidence’ given the name of the city that later arose.

By the 1830s Cook Strait was full of whaling ships but there are no records of any ships visiting the harbour, with the exception of a small missionary schooner. There are reports of Europeans living with local iwi, possibly operating trading posts, before formal settlement began in 1840.

In 1839 the sailing ship the Tory arrived with representatives of the New Zealand Company, who intended to purchase land and prepare settlements for the British emigrants the company was recruiting.

Te Āti Awa chiefs Te Puni and Wharepōuri signed a deed of purchase with the New Zealand Company in September 1839. The validity of this transaction was later contested. The deed promised that Māori would retain their pā, kāinga, cultivations and mahinga kai, and, ‘A portion of the land ceded by them, equal to one-tenth part of the whole, will be reserved by … the New Zealand Company … and held in trust by them for the future benefit of the said chiefs, their families, and their heirs for ever.’ The ‘native reserves’ included ‘Cooks Mount’ (Pukeahu) and two neighbouring acres.

The New Zealand Company’s first settler ship, the Aurora, arrived at Pito-one (Petone) on 22 January 1840, and set up a community there. However, after the settlement was flooded in early March, the settlers moved across the harbour to Thorndon and Te Aro. By the end of the year 1,200 British settlers had arrived in Wellington.

The New Zealand Company parcelled up the land into sections for settlers, who were to get one town acre (0.4 hectares) and an accompanying 100 country acres (40 hectares). There were 1100 one-acre town sections in the plan for Port Nicholson. The New Zealand Company surveyors paid no attention to the sites Māori had been promised and, over time as the city grew, Māori moved away.

Next: From Pukeahu to Mount Cook