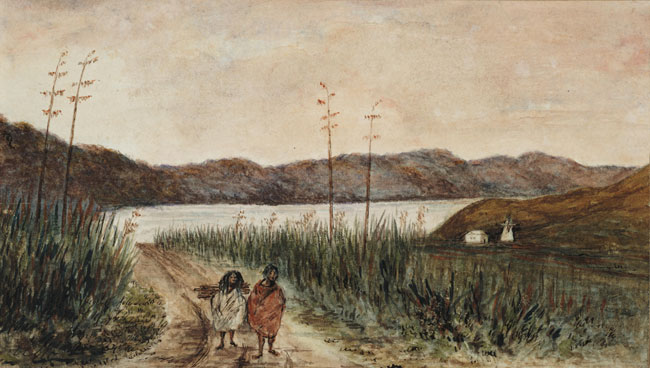 This 1852 illustration shows two Māori figures standing on a road leading to the Mount Cook Barracks. Flax bushes are seen on the side of the road, which suggests what the vegetation in the area was like before the arrival of Europeans.
Credit: Alexander Turnbull Library. Reference: E-455-f-034-1. Watercolour by John Pearse. Permission of the Alexander Turnbull Library, National Library of New Zealand, Te Puna Mātauranga o Aotearoa, must be obtained before any re-use of this image.

There is little doubt Pukeahu was used for settlement in ancient times. However, there is no oral history of specific pā (fortified villages) on the site.

Much of the land around Pukeahu was occupied by ngakinga (gardens) for the Te Akatarewa pā. This was a major pā for the Ngāi Tara iwi, so they developed numerous garden sites, including on Pukeahu. These gardens were also used by the Taranaki iwi from Te Aro pā centuries later.

The earliest gardens were for the cultivation of bracken ferns for their edible roots. This simply involved clearing the forest and allowing the regrowth of ferns. Māori then terraced the hills for growing kūmara (sweet potato). Later, potatoes, melons and corn were planted. These garden clearings extended into Aro Valley and Newtown, and were in active use when the New Zealand Company surveyors arrived in 1839.

The Hauwai cultivation area bordered the Hauwai swamp and ran up the hill to around where the entrance to Wellington College is today. Hauwai swamp was a mahinga kai (food-gathering area), where eels and other fish from the swamp streams were gathered.

Ngā Kumikumi clearing was an old cultivation area in the bush around what is now lower Nairn Street. Nearby, around Central Park, was the Te Āti Awa kāinga (village) known as Moe-i-te-rā or Moe-rā.

There are few, if any, known wāhi tapu (places of spiritual significance to Māori) directly on Pukeahu. However, because of its height and proximity to Te Akatarewa pā, it is likely that burials were conducted somewhere on the site.

Cultivation in this area was less formal than in some regions, where gardens had stone walls and feature stone or wooden mauri (carved figures believed to maintain mauri or life force). While gardens round Pukeahu may have had mauri stones associated with them, these would have long since been removed.

Since European settlement in the 1840s, Pukeahu has been heavily modified, leaving little of the pre-colonial landscape. The cone-shaped hilltop was flattened off and lowered by some 30 metres, and so any remnants of Māori use and occupation are likely to have long since been removed.

Next: The Arrival of Europeans