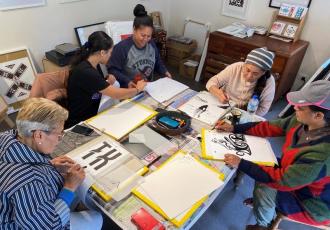 On this page, you will find details about online resources provided by other organisations.

The National Library of New Zealand has the Treaty of Waitangi on display as He Tohu, a new permanent exhibition of three nation-building constitutional documents.

Download any of the six free Path to Nationhood tours for iPhones and iPads or Android and experience the heart and soul of early New Zealand’s Northland where Māori and Pākehā first met.

The Commission has produced a video resource featuring iwi leaders reciting a version of the UNDRIP adapted for a New Zealand context. Also on this website is Te Mana i Waitangi – Human Rights and the Treaty of Waitangi booklet.

The Library's Services to Schools webpage provides a list of additional Treaty of Waitangi websites. You can also view many more resources held by the National Library of New Zealand here.

The National Preservation Office Te Tari Tohu Taonga has published a new guide:  Caring for Taonga – Marae Photographs  Āta Tiakina Ngā Whakaahua I Ngā Marae.  If you or your organisation would like a copy please email:  [email protected]

A copy of their Treaty of Waitangi: Questions and Answers document answering over 50 frequently asked questions can be downloaded here.

Search this website for New Zealand television and film video clips which features historic news clips including in 1973 when Prime Minister Norman Kirk announced that the anniversary of the signing of the Treaty of Waitangi would be a unifying national holiday. In 2015 NZ On Screen launched their Waitangi Collection which features a wide selection of local documentary, drama, current affairs and newsreel footage, ranging in date from 1960 to 2009.

In this part of the Radio New Zealand website you can find a collection of audio which explores the history of the Treaty of Waitangi. Recordings of the annual Treaty debates held at Te Papa from 2005 onwards and the Waitangi Rua Rautau lectures from 2013 onwards are also found on this website.

Te Papa's Treaty 2 U website was created as part of their touring exhibition. This exhibition has now closed but you can still view material from their work including where you can listen, interact, and most importantly have fun.

This website includes a historical context, the Declaration of Independence in English and Māori, a letter  from James Busby to the British Under Secretary of State and an extract of a Despatch from Lord Glenelg to Major-General Sir Richard Bourke, New South Wales, dated Downing Street, 25th May 1836.

The Waitangi National Trust in association with the Ministry of Education has developed an educational programme available to schools visiting the Treaty Grounds.

Over the years, the Tribunal has produced a number of resource kits for use in primary and secondary schools. Although most were first published some years ago, they have been reviewed and can still be used effectively within the social studies syllabus.

Treaty of Waitangi Past and Present - the latest resource kit looks at the signing of the Treaty of Waitangi, and places it within the context of New Zealand society at the time. It also examines what the Treaty means today. The kit was written for primary school students, fitting within the social studies curriculum, but will be useful for all Māori language students.

The kit contains booklets in both English and Māori, eight full-colour A4 illustration cards, and a teachers' guide, which lists further resources.