Richard John Seddon's Memorial is located on the original site of Wellington's first Time Service Observatory at the Kinross Street entrance to the Bolton Street Cemetery. Located under the memorial is the Seddon family tomb. It contains the remains of Rt Hon Richard Seddon (1845-1906) and Mrs Louisa Seddon (1851- 1931), daughter Mary Stuart Hay and a memorial to their son Richard John Spotswood Seddon who was killed in France in 1918.

The Memorial was designed by Government Architect, John Campbell, and built by Edwards and Son of Waring Taylor St. The design is a reinforced concrete column faced with Coromandel granite, mounted over the tomb on a square concrete base. The bronze figure at the top of the column was modelled at the London studio of Henry Poole, a young British sculptor, and cast in London by Alessandro Parlanti. The statue represents the State in mourning for its dead. In the left hand is a wreath of mourning leaves and in the right a scroll of State, with the seals dependent. The right foot rests on two books, possibly legal, and a small twig breaks the hardness of the column.

The above YouTube clip showing the statue being lifted back to the top of the memorial in November 2022 does not include any sound.

In April 2022, MCH commenced the second (final) phase of this project. Phase two involves earthquake strengthening and completion of all remaining conservation works and landscaping.

It was initially estimated that phase two would take approximately eight months, with completion in November. The project has been progressing very well, and while the team have been working hard to keep to schedule, we have encountered a few delays. The majority of the works will be completed by December 2022, just prior to Christmas. Final landscaping will occur in the early months of 2023.

If you have any queries, please email [email protected] with ‘Seddon Memorial’ in the subject line or telephone (04) 499 4229. 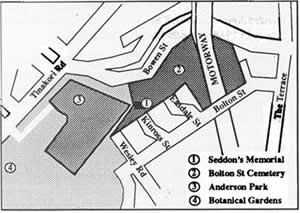 Location of the Seddon Memorial.