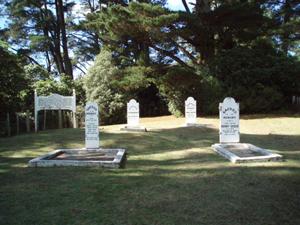 At Opepe, on the Napier-Taupo Road, is a tiny cemetery containing five graves. Only two of the graves are war graves, containing the bodies of nine members of the Bay of Plenty Cavalry who were killed in a surprise attack by Te Kooti's advance guard on June 7th 1869. The other three graves are of settlers who died after the New Zealand Wars had ended, but the Ministry has assumed responsibility for the care of those graves as well.

The totara headboards are the original ones, which have been repainted several times over the years. However, they were showing the effects of time, and it is suspected that water ingress was causing the paint to peel and crack. With the help of Department of Conservation staff, the headboards were dismantled and removed from the site on 14 June 2010.  They were then transported to Manawatu Museum Services for expert repair and renovation.

This process has been completed and the headboards were re-installed in the little cemetery at Opepe by Department of Conservation staff on Christmas Eve 2010.

You can also view this Opepe Roadside Story about the 1869 attack on our NZHistory website.