An Anzac commemorative site was built at Gallipoli in conjunction with the Australian government and with the approval of the Turkish government. The new site was dedicated on Anzac Day 2000 by the Prime Ministers of Australia and New Zealand.

Built three hundred metres north of Ari Burnu cemetery, the site of past Anzac Day dawn services at Gallipoli, this site is dominated by a rocky hill named the Sphinx. It was one of the first landing places of the ANZAC force and was one of the main places where the evacuation took place, nine months later.

Visit the NZHistory website for images of this site (including a 3-d panorama). 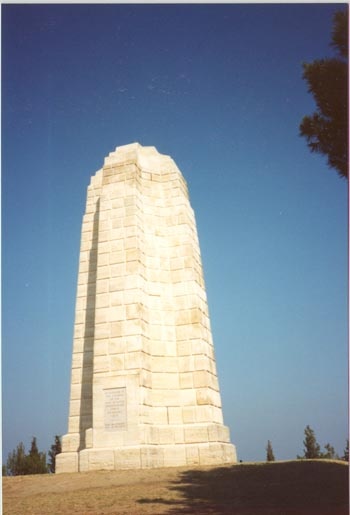 The Commonwealth War Graves Commission undertook a refurbishment of the Chunuk Bair Memorial in late 2013 and kindly supplied us with the following photo.

View from the top of the Memorial taken in November 2013.

The cleaning of the fabric of the Chunuk Bair (New Zealand) Memorial in Gallipoli, and repairs to the stonework, have been completed, and the memorial is once again open to access by the public.