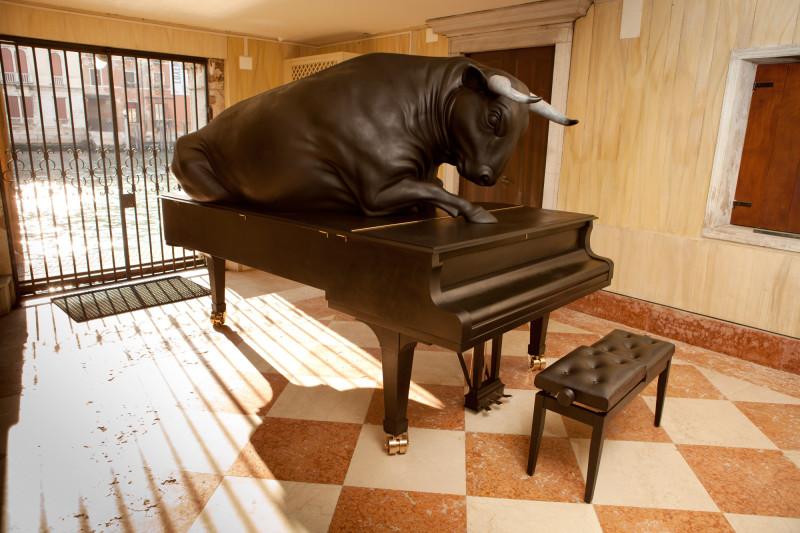 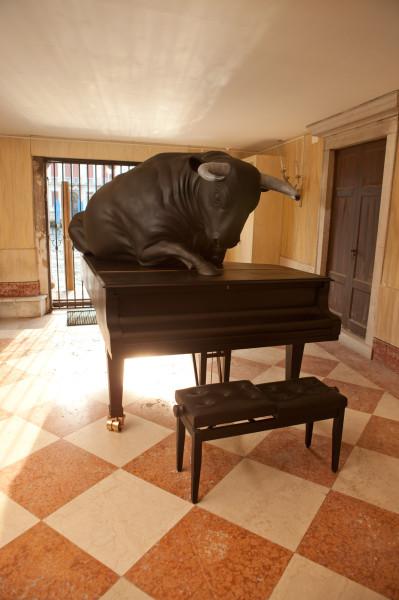 The exhibition sees a ‘surprise’ element in Venice for those who viewed the work earlier this year in Henderson, Auckland.  The intricately-carved Steinway concert grand piano, He Kōrero Purākau mo Te Awanui o Te Motu : story of a New Zealand river, has been repainted a deep red from its original black.

The new colour scheme reflects the flag of the Venice republic (red and gold) and the brass inlay is now gold, a clever feat of alchemy; “Alchemist is an anagram of St Michael”.

On first looking into Chapman’s Homer pays tribute to the poem of the same title by the nineteenth-century English Romantic poet John Keats. The work references notions of discovery, exploration, and the cultural interplay between the old and new world.

Music and performance are a central aspect of the installation, of which Parekowhai says, “While the objects in On first looking into Chapman’s Homer are important, much of the real meaning of the work will come through music, which fills space like no object can.”

In addition to the carved Steinway concert grand piano, there are two concert grands fabricated in bronze supporting two cast bronze bulls. On one piano a full-size bull rests on the closed lid (A Peak in Darian) with its massive body suggesting the folding forms of landscape. On the other piano (Chapman’s Homer) the bull is standing firm offering an eye-to-eye challenge for anyone prepared to take a seat at the keyboard. The installation also features a figure from the Kapa Haka series (Officer Taumaha) and two small bronze olive tree saplings (Constitution Hill).

Commissioner Jenny Harper says, “On first looking at Chapman’s Homer is topical and creates a sense of drama and surprise for audiences.”

Five New Zealand pianists will perform a mix of New Zealand, jazz and classical music on the carved Steinway piano throughout the five-month exhibition.  The public will also be provided with the opportunity to play the piano at the discretion of the pianist.

Creative New Zealand has invested $700,000 in the exhibition with a record level of patronage support of $315,000 raised.  Other support has been received from Te Papa Tongarewa, Invivo Wines, Antipodes Water, Helleman’s Transport and The Edge.