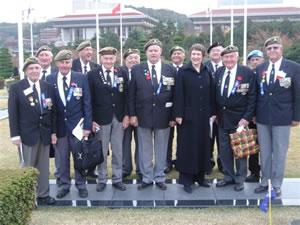 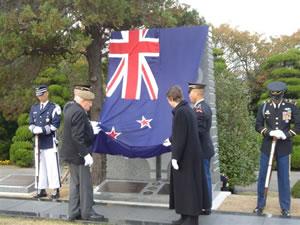 The memorial commemorates New Zealand’s contribution in the Korean War. It is located in the United Nations Memorial Cemetery Korea (UNMCK) in Busan, where most of the New Zealanders who died in that conflict are buried. The then Prime Minister Helen Clark unveiled the memorial on 19 November 2005 during her visit to Korea for the APEC meeting. The ceremony was attended by 17 New Zealand Korean War veterans along with other distinguished guests

Around 6,000 New Zealanders served with the United Nations’ forces in the Korean War and its aftermath (1950-57). The memorial is dedicated to those 6,000 who served, and commemorates the 45 who died, 34 are buried in the cemetery, where 2 naval personnel with no known graves are also commemorated.

The memorial is an all-New Zealand creation. It was designed by Warren and Mahoney Architects, and the Coromandel granite panels were cut and polished by Trethewey Granite and Marble Limited of Auckland, supervised by John Edgar. The bronze inscription and interpretation plaques, and the emblems of the New Zealand Army, Navy and the United Nations were cast by The Heavy Metal Company Limited of Seaview, Lower Hutt. Image of the New Zealand Memorial in Korea is courtesy of Nigel Robson.

The surface pattern of the memorial, designed by Fred Graham, is based on a Māori woman’s chin tattoo.  Known as a moko, it was traditionally a sign of adulthood, an indication that the wearer was able to bear pain and take on responsibilities. Women especially suffer keenly from the loss of loved ones in wartime. Here the design represents New Zealand as the mother of all who served their country in wartime, and the strands running down side by side, Army and Navy, are shown merging with a third party, the United Nations. Along the sides of the memorial are 45 cuts into the stone, each marking the loss to New Zealand of a serviceman who died during the Korean War. The inscription on the memorial is written in English, Māori and Korean.

New Zealand in the Korean War (from NZHistory)