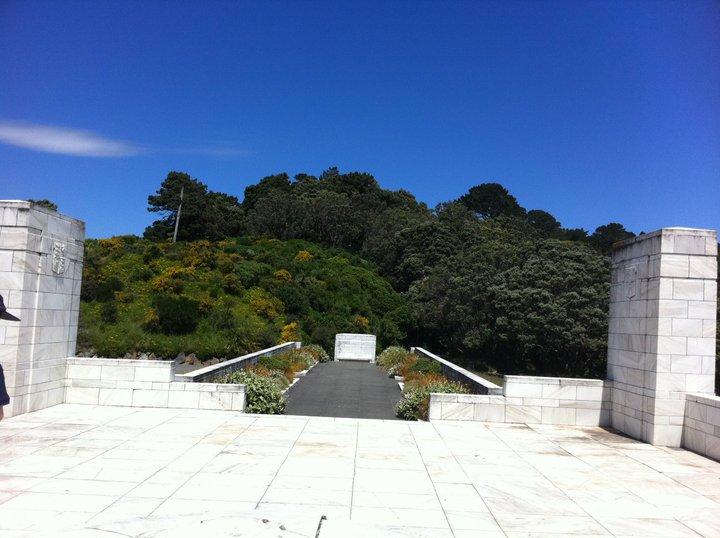 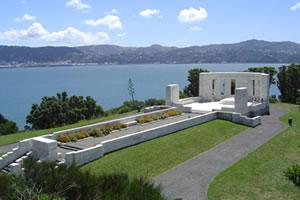 
A map showing its location is available here.  The Memorial is accessible at all times with a short walk to the Memorial from bottom of Shelly Bay Road.

Originally known by its Māori name, Kaitawharo ('to eat jellyfish'), Point Halswell, was renamed after the Commissioner of Native Reserves, Edmond Halswell, who arrived in New Zealand in 1841. In 1886, because of fears about Russia's presence in the Pacific following the Crimean War, an 8" gun emplacement was constructed on the site. The gun pit was later incorporated into the design of William Ferguson Massey's tomb underneath the Memorial.

Shortly after Massey's death in 1925, the Massey Burial Ground Act was passed allocating land at Point Halswell to be set aside as a burial ground for him and his widow. Public subscriptions raised funds totalling £5,000 and the government contributed £10,000. Auckland architects Gummer and Ford and consulting architect Samuel Hurst Seager were engaged to design a fitting tomb and memorial. Gummer and Ford were responsible for designing numerous war memorials around New Zealand, including the National War Memorial in Wellington. Seager had also designed a number of memorials in New Zealand, and is best known for the New Zealand War Memorial at Chunuk Bair, Gallipoli.

The Memorial was built by the firm of Hansford and Mills Construction. They were also responsible for building Parliament Buildings and the Mount Victoria Tunnel. The exterior of the memorial was laid with a base of Coromandel granite covered with Kairuru marble from the Company's own quarry near Takaka. The Memorial was completed in July 1930 and was unveiled by His Excellency the Governor-General, Lord Bledisloe, on 19 September 1930.

Bill Massey was born in Limavady in County Londonderry, Northern Ireland, and came to New Zealand at the age of 14. He established a farm at Mangere and became the chairman of the Mangere Farmers' Club. He entered Parliament in 1894 and gradually established a role as a spokesman for conservative farming interests. In 1903 he became leader of the opposition and in 1912 the first leader of a Reform government. He led New Zealand through the First World War and remained Prime Minister until his death in 1925.

Use of Memorial Grounds

The Memorial is in the care of the Ministry and is governed under the terms of the Massey Burial Ground Act of 1925. All enquiries for use of the Memorial grounds must be sent in writing to the Ministry who will then contact the Massey family for their consideration.

The consumption of alcohol is prohibited at all times on site.