Te Papa is celebrating 150 years since the founding of the Colonial Museum in 1865, which evolved into today’s Te Papa. 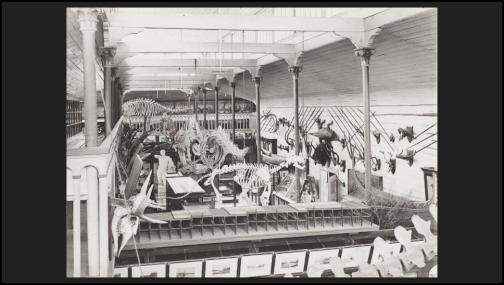 Interior of Colonial Museum, 1860s is courtesy of Te Papa.

On December 8th 1865, the Colonial Museum was founded in Wellington by scientist and collector James Hector, who later gave his name to Hector’s Dolphin.

The Colonial Museum began its days in Museum Street near Parliament, then became the Dominion Museum in Buckle Street, and eventually evolved into the modern day Te Papa in 1998.

“We are thrilled to be able to mark this momentous anniversary,” says Te Papa Chief Executive Rick Ellis.

“When we look back on our history we see an amazing tradition of celebrating New Zealand’s uniqueness.”

Among the species named by museum founder James Hector was Taniwhasaurus, a marine dinosaur.

“From the earliest days, you can see how the museum joined Maori and European world views to create something uniquely New Zealand,” says Mr Ellis.

In its first year, the Colonial Museum had around 2,000 visitors. Te Papa welcomes well over a million each year.

The original visitor book from the 8th December 1865 is currently on display at Te Papa as part of “You Called Me What?” – an exhibition on species named by the museum’s directors and scientists.

Visitors can use an interactive screen to suggest their own names for two new species recently discovered by Te Papa staff, and become part of New Zealand’s scientific history.

Mr Ellis said that each generation of leaders had played their part to ensure that museum stayed relevant in changing times.

“The opening of Te Papa in February 1998 was a landmark in New Zealand’s development as a nation.”

“In the 1990s, Cheryl Sotheran and Cliff Whiting were the visionaries who led the creation of the Te Papa we see today,” says Mr Ellis.

“From the very first day, New Zealand voted with their feet. We had over a million visitors in the first year, and have just topped 25 million since opening.”

Te Papa is about to begin a major renewal of this building, replacing its permanent exhibits.

“These are exciting times. But then again, at the museum, they always have been,” says Rick Ellis.

“If James Hector were here today, I think he would be very proud of his legacy.”

“Hector’s spirit of discovery is still strong, and I believe it will be for the next 150 years, and beyond.”

• The construction of the Colonial Museum in 1865 was 945 pounds 19 shillings and tenpence.

• In 1932, the Government agreed to build a new museum, but said Wellington would need to pay half. The Chinese community was a generous donor, as were a wide range of other ethnic groups in the city, from Danish to Syrian.

• The museum cat was a valuable member of staff in the 1930s, when the museum stores were over-run with mice.

• Museum staff used to be issued with shot guns to collect birds for the museum.

Behind the scenes at the museum

In late 1800s, Charles Carter (whom Carterton is named after) was travelling through Cairo, and picked up an Egyptian mummy for the national museum. He wrote to tell Hector it was on its way. The letter never arrived, but the mummy did, much to the surprise of James Hector!

In the 1980s, the museum was set to be the final resting place of Wellington Zoo's elephant, Kamala. She was buried at the zoo so that nature could do its work, but the clayey soil wasn’t helping. Museum staff took on the unenviable job of digging up the elephant by hand, and boiling up the skeleton. One of the team, Mike Hurst, had a distinct advantage - he had no sense of smell!