The care, conservation and custody of Pukaki is provided by the Pukaki Trust on behalf of the Crown. 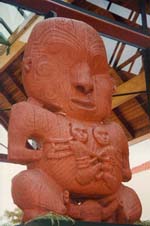 Pukaki was originally a carving created as part of a gateway that stood 5 metres tall, to guard the southern entrance of the marae at Ohinemutu in Rotorua. Pukaki was expertly crafted by Te Taupua of Ngati Whakaue from one large piece of totara timber. Pukaki is depicted holding his two warrior sons Wharengaro and Rangitakuku, while between his legs can still be seen the remnants of his wife Ngapuia. In the 1850s, Pukaki was brought down and his lower portion removed, transforming him from a gateway to a statue (tiki).

In 1877 Ngati Whakaue gifted Pukaki to the Crown as a symbol of trust regarding the Crown's promise to develop the Rotorua township for the benefit of Ngati Whakaue. The taonga was held at Auckland Museum until 1997, when Ngati Whakaue confirmed and completed the gifting and transfer of ownership of Pukaki to the Crown. Pukaki was located in the galleria of the Rotorua District Council building from 1997 to 2011. The taonga was relocated by consensus of Ngāti Whakaue and the Trust to form the centrepiece of the new wing of the Rotorua Museum of Art and History when it re-opened in September 2011.

Board membership as at 2020

Reserve Bank information about the use of Pukaki on the 20 cent coin.