'End of an era’ for Māori Battalion 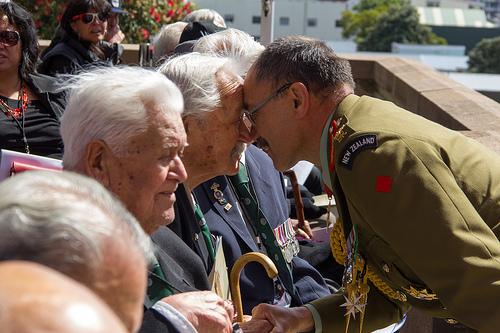 The National Commemorative Ceremony for the close of the 28 Māori Battalion Association was held on Saturday 01 December 2012 at the National War Memorial.

Members of the 28 Māori Battalion attended along with whanau before the final official Luncheon held at Pipitea Marae in Thorndon.

The Māori Party salutes the survivors of the 28 Māori Battalion as they assemble one last time to remember fallen comrades and reflect on their exploits.

“This is the end of an era because we will not see another national hui – so it is an appropriate time to acknowledge our wartime heroes, and to thank them for the way they upheld the mana of our ancestors, mai rā anō,” said Co-leader Dr Pita Sharples.

“The winding up of the Association will relieve the old soldiers and their whānau of a legal responsibility. But this is not the end of the Māori Battalion by any means.”

Dr. Sharples said “their whānau and the nation will treasure their legacy of service and sacrifice, and their mana will live on forever in the hearts and minds of people in Aotearoa and overseas.”

“Their exploits are recorded in song and haka, on films and tapes and in books, and on the website. They will continue to inspire future generations to give their utmost for their people and their nation.

On the left, eyes quizzical,

one has features to delight any sculptor.

Would he return unscathed

to offload his story

to the next eager fleet of argonauts?

Another Requiem in khaki.

Is the here and now

Images from Māori Battalion Farewell on the Ministry's Flickr page.