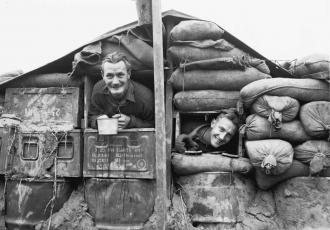 Four toi moko are being received by Te Papa in Germany this week, to be repatriated to Aotearoa New Zealand. Te Papa staff and iwi (tribal) representatives pay their respects to ancestors returned to Te Papa in 2016. Traditional fine feathered cloaks are placed over the travelling cases containing the ancestors, as a mark of honour and respect. Photo credit: Kate Whitley, Te Papa.

His Excellency Rupert Holborow, New Zealand Ambassador to Germany, will lead the New Zealand delegation at both ceremonies.

These are the latest ancestral remains to be received by the museum under the Karanga Aotearoa Repatriation Programme.

Where possible, ancestors repatriated to Aotearoa are returned to their descendants.

The iwi (tribal) connections of these four Toi moko is not known, so on return to New Zealand they will rest in Te Papa’s wāhi tapu (sacred repository) while additional research seeks to identify their place of origin.

His Excellency Rupert Holborow, New Zealand Ambassador to Germany, said the repatriation reflected the strong and enduring ties between Germany and New Zealand.

“This historic repatriation reflects the strong ties of respect and friendship between our two nations,” Mr Holborow said.

“Germany and New Zealand enjoy a supportive relationship based on common interests and values.”

The current repatriation follows the return In 2019 of 109 Māori and Moriori ancestral remains from the Berlin Museum of Medical History at Charité.

“We are thankful to our colleagues in Germany for their efforts to return our ancestors to their homes," Dr Hakiwai says.

"These are not easy discussions, and we appreciate the sensitivity and care of our colleagues to bring us to this milestone."

“These are not objects, they are our sacred tūpuna (ancestors) and we can now bring them home where they belong.”

Dr Hakiwai said the work of the Karanga Aotearoa Repatriation Programme was carried out by the museum on behalf of all New Zealanders.

“Through this work, the ancestors are embraced by their whānau (family), comforted by the spirit of the land, and once again return to a peaceful enduring slumber,” he said.

The four Toi moko will be welcomed to Te Papa in a ceremony in early November.

Transiting sacred human remains internationally is a highly specialised activity, governed by Māori protocol and by national and international laws. Te Papa is following additional strict protocols in this repatriation to mitigate the risk of Covid-19.

Comment from Mr Michael Kraus of University of Göttingen: "We have no information on how the two Toi moko got from New Zealand to Europe. However, out of respect for the Māori people, especially with regard to the close relationship between the Māori, their ancestors and their territory, we gladly support the return of the two Toi moko."

As far as it can be traced back historically, in 1834 the University of Göttingen received the Toi moko from the English royal house of Windsor. From then on, these Toi moko were part of the holdings of the Academic Museum of the University.

Comment from Mr Hermann Parzinger, President of the Stiftung Preußischer Kulturbesitz (SPK), to which the Ethnological Museum belongs: "Today's ceremony marks the beginning of the journey of the Toi moko from the Ethnological Museum back home. For the SPK it is the first repatriation of ancestral remains, and I am very glad that it could take place this year despite the pandemic situation. I would like to thank our New Zealand partners for the uncomplicated cooperation and the fruitful exchange with them. We are constantly learning, through our own provenance research, but also through such exchanges, and we will do everything in our power to continue along this path in order to make amends for historical injustice.”

Comment from Ms Monika Grütters, Germany’s Minister of State for Culture and Media: "The repatriation of the two Toi Moko to New Zealand is another important sign of reconciliation to the societies affected by colonialism. The return of human remains has the highest priority in the processing of colonial collections. In a respectful dialogue with our partners in New Zealand, we have found an amicable solution to this problem. Thus we once again stand up for our historical responsibility for the reappraisal of German colonial history.”

The names of the ancestors, their fate, and the story of how they were brought to Europe will probably never be known. According to the museum’s information, Mr Fedor Jagor bought one Toi moko in London in 1879 on behalf of the museum.  Mr Jagor was an amateur ethnologist. Mr Hermann Meyer donated the other Toi moko to the museum in 1905. Mr Meyer was a publisher and geographer who travelled widely, but never to Oceania.  It is clear that neither Mr Meyer nor Mr Jagor brought the ancestors to Europe.

The trade in ancestral remains

The global trade in human remains saw many hundreds of ancestors taken from Aotearoa during the 1800s. The trade was fuelled by an intense curiosity with native peoples’ culture and physical anthropology amongst wealthy collectors, academic institutions, medical schools, and museums.

The Museum of New Zealand Te Papa Tongarewa, known as Te Papa, is the national museum of Aotearoa (New Zealand). It holds the world’s most important collection of Māori art and taonga (treasures). It works closely with iwi (tribes) to recognise and preserve the ties between taonga and their communities. Based in Wellington, Te Papa attracts more than a million visitors a year.