Labour Weekend this year coincides with the centenary of the early stages of one of the largest and most violent strikes in New Zealand’s history. The Great Strike of 1913 has been described by historian Peter Clayworth as ‘the closest we have come to a Pakeha Civil War’. 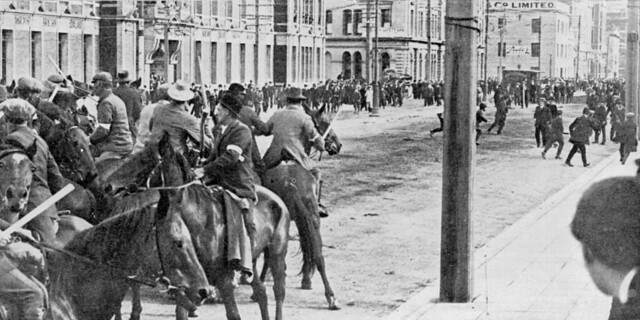 The ‘great strike’ was in fact a series of strikes throughout New Zealand, occurring from mid-October 1913 to mid-January 1914.  ‘The Great Strike saw riots, gunfire and cavalry charges on the streets of Wellington’, says Ministry for Culture and Heritage Chief Historian Neill Atkinson. ‘A general strike in Auckland paralysed the city for a fortnight, and strikers controlled the coal mining areas of the West Coast for over a month.’

The strike was a power struggle of militant unionists against organised employers and farmers, backed by the government. Up to 16,000 workers downed tools at a time when New Zealand had a population of just over 1,000,000.

The Ministry for Culture and Heritage, in association with the Labour History Project, has created a feature on the NZHistory website to mark the centenary. It includes an illustrated overview of the main events and a map showing key locations around the country. Founded in 1987 as the Trade Union History Project, the LHP is an independent heritage organisation dedicated to preserving and fostering New Zealand’s labour history.

The LHP has also created the 1913 Strike Flickr page where images from sources around the country are being collected, including recently digitised copies of documents from Archives New Zealand. “Having all the 1913 Strike images and documents in one easy to search digital repository is a major step towards improving the coverage of this important part of our history” says Clayworth.

Wellingtonians can also take part in guided walks of significant sites relating to the Strike which will run every Sunday in November from 10am-12pm.